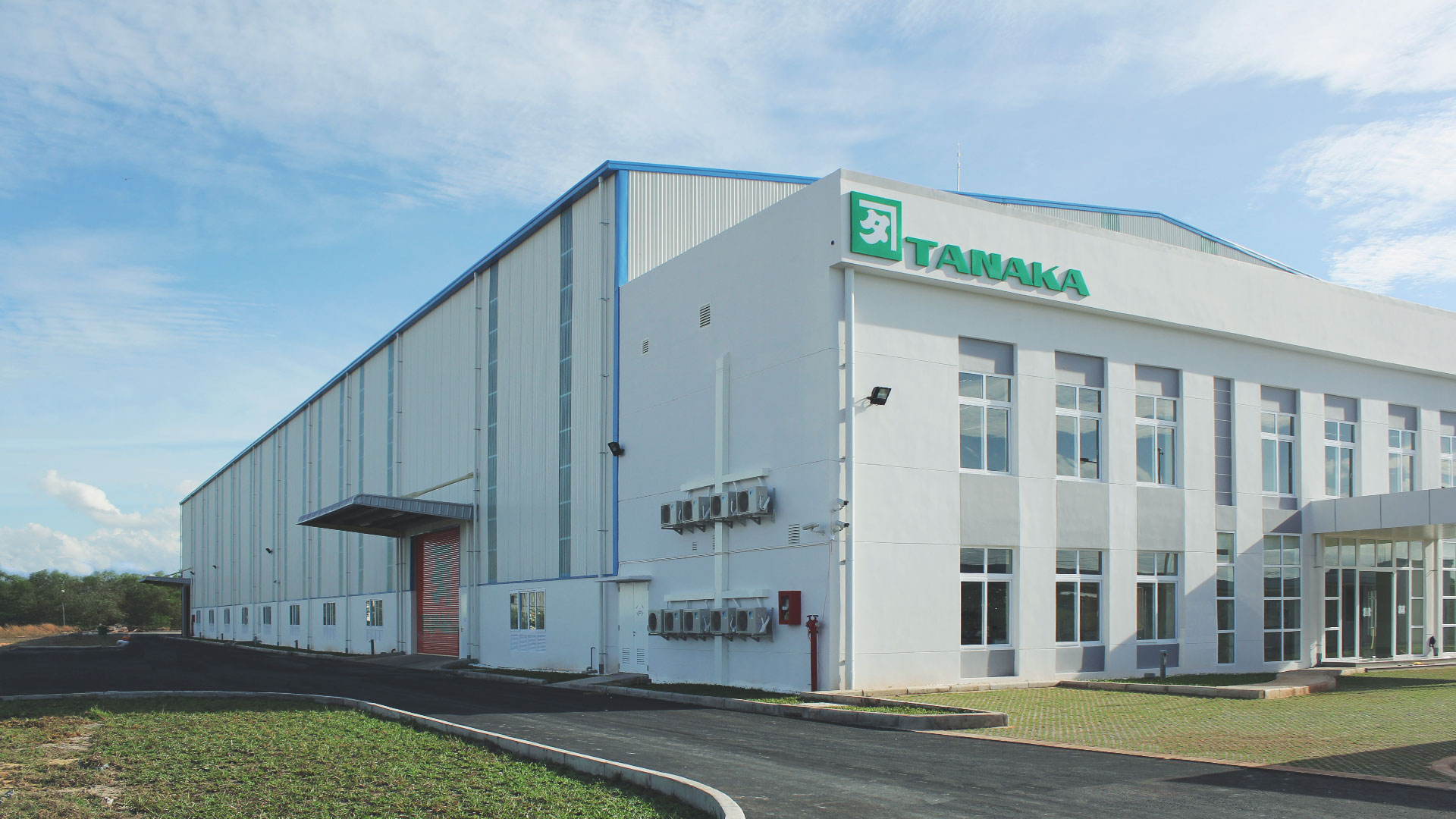 “We want to help the people of Viet Nam,
and we’re confident we can.”
WIDTH: PX, HEIGHT: PX

“We want to help the people of Viet Nam, and we’re confident we can.” 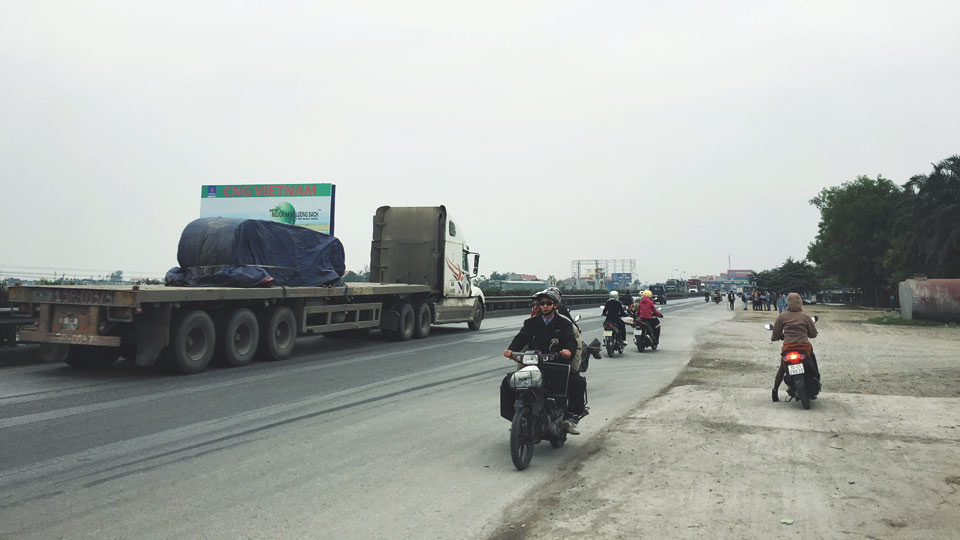 A typical scene in Viet Nam: a large truck carrying a load that clearly exceeds the maximum loading capacity, driving noisily down the highway. This leads to potholes and fatal injuries. In the winter of 2012, the Directorate for Roads of the Ministry of Transport of Viet Nam sent a request to Hidetoshi Hasegawa and XXX Nha, the president and vice president of Tanaka Scale Vietnam Co., Ltd.: "We would like you to propose a system to measure the load on trucks on the roads to control overloading. Can you do it?" Hasegawa tells the story: "It was only one year after we had established a local subsidiary in Viet Nam. The request came as we continued our sales activities, making steady efforts to build a network of connections with the people of Viet Nam. I asked our head office in Japan to support us. I saw it as a chance to enhance our presence significantly in Viet Nam." The head office team was of the same mind. "We can surely do it. Let's try it for Viet Nam," said Yasuyuki Tanaka, president of Tanaka Scale Works. He visited Hanoi immediately and created a technical proposal in a short period of time, working with technical members in Japan. Tanaka visited the Directorate for Roads and presented his proposal: "Now that we have established a local subsidiary in Viet Nam and now we are working with the people of Viet Nam, we want to help Viet Nam. Please allow us this opportunity to show you what we can do." Apparently, his passion came across—Tanaka Scale Works' proposal beat out one from a major European manufacturer. In addition, it was also selected for JICA's small and medium business support project, which provided support for development costs. This was how Tanaka Scale Works' first ODA project for an overseas government agency started. 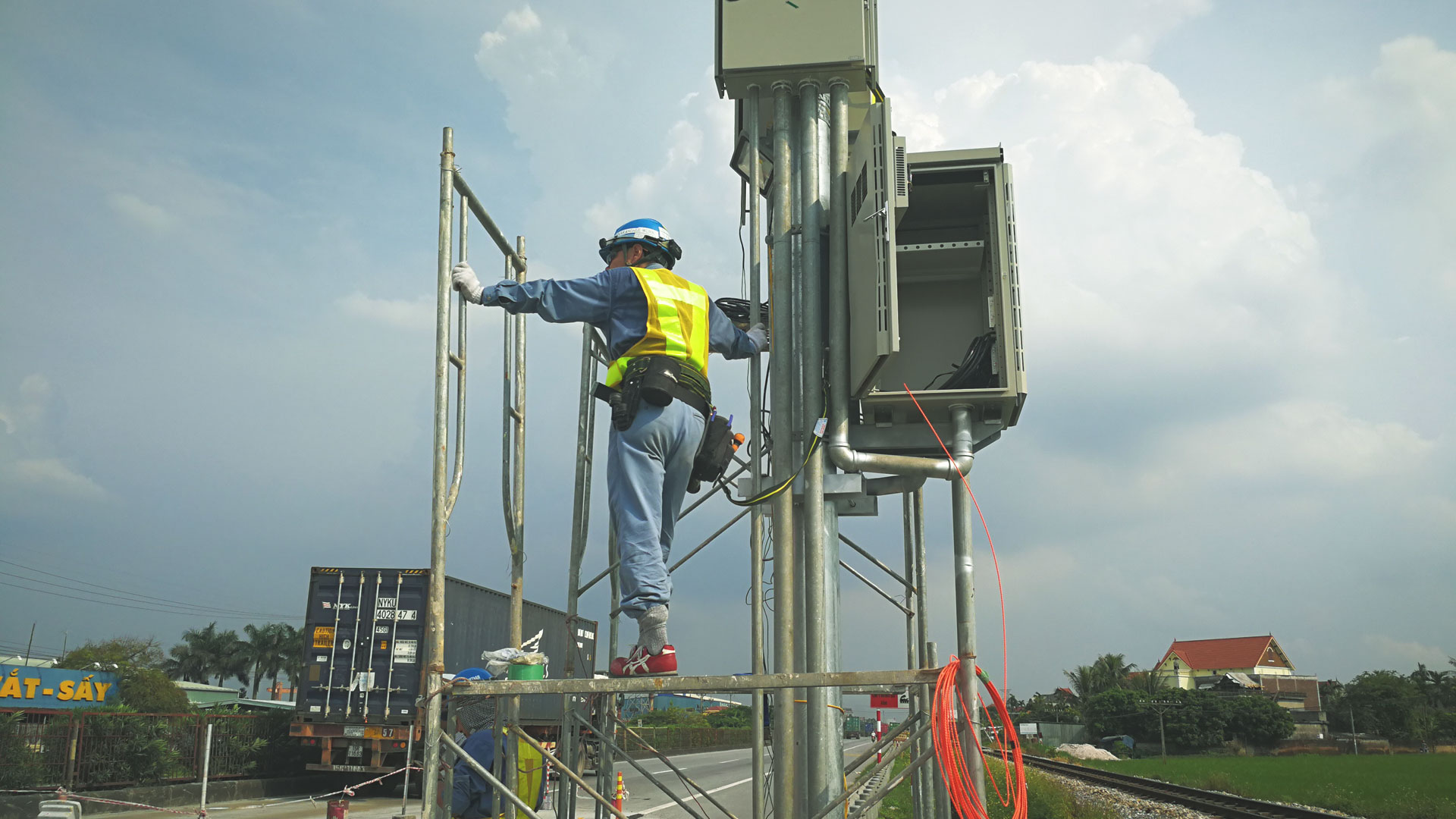 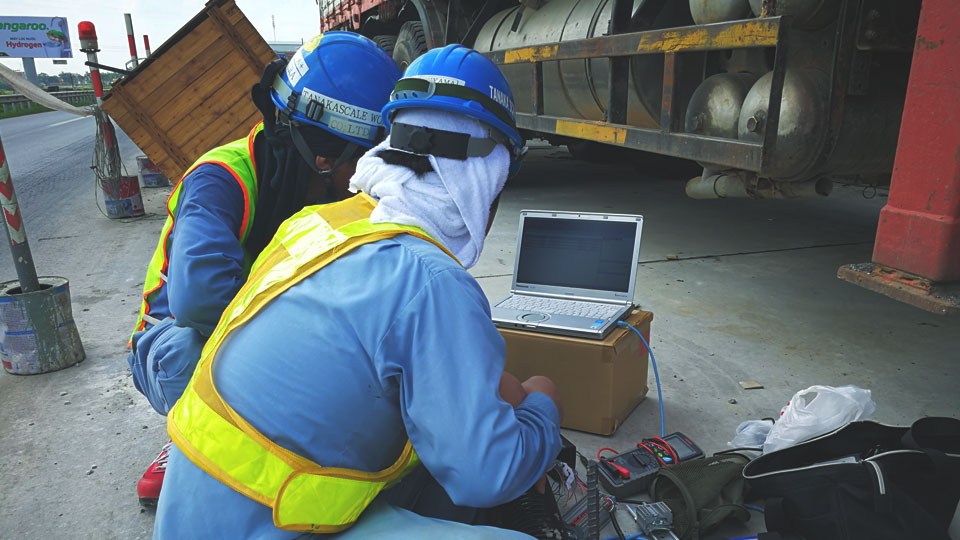 Akira Chaki, the manager of technology, and Takayuki Wakabayashi, the manager of development (at the time), started to go back and forth between Japan and Hanoi to move the project forward. Wakabayashi remembers, "Although we had past know-how in our company, we needed to think about the formula for deriving weight from scratch for this particular application." First, after repeated simulations with models, Wakabayashi installed a full-scale prototype on the factory premises of Tanaka Scale Vietnam. Is it possible to measure correctly within an error of less than 5% from a momentary signal when the truck runs over the scale? Day after day was spent collecting data from passing vehicles. Meanwhile, Chaki was struggling with differences in business customs while negotiating to proceed with the installation of facilities on National Route 5 going from Hanoi to Hai Phong for the first phase of the project. He reports, "Although I had permission to set up on the road long before, the work did not start at all. It was really hard when I had to wait without knowing the reason because nothing started even if I hurried. I still remember the joy of finally starting the roadwork and getting a cutter on the road." A breakthrough also occurred in Wakabayashi's investigation of a formula that he had been struggling with: "I had been thinking about the formula for many days, and was finally able to find a way to make it work.” The tenacious spirit of Tanaka as a scale manufacturer bore fruit, and in September 2015, a real machine was finally installed on National Route 5 for phase 1 of the project. When they started collecting data on actual roads, they obtained a higher level of accuracy than originally expected. The team was excited about the results. 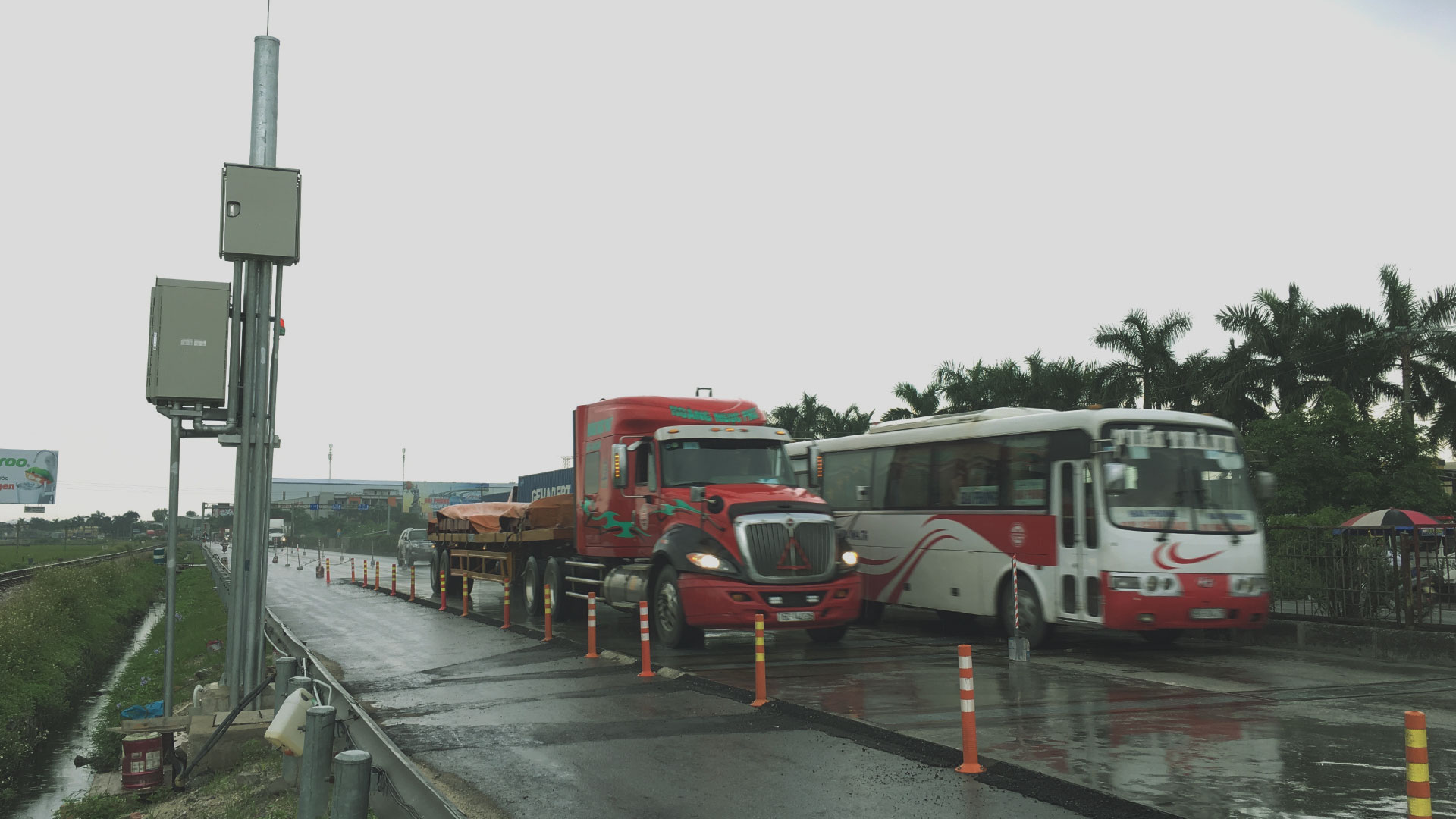 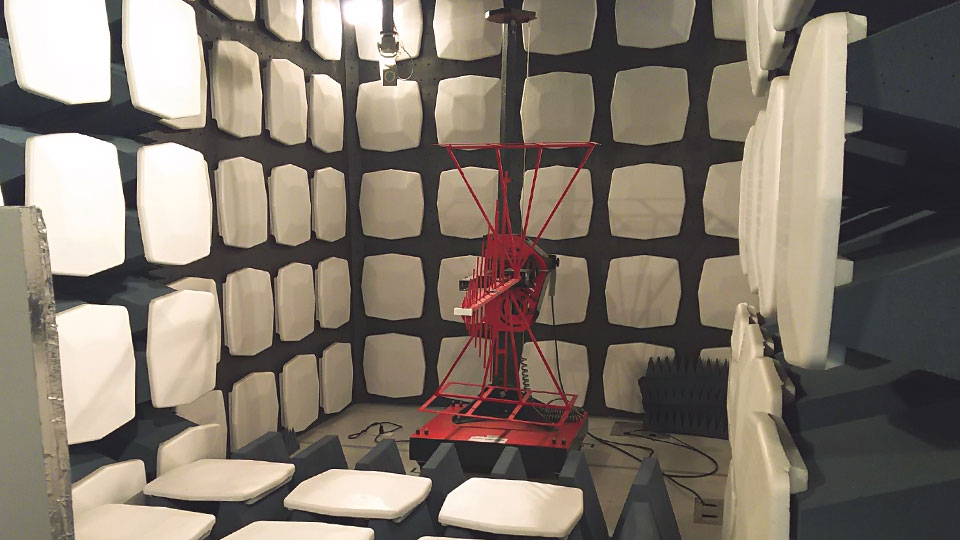 Success was at hand, and finally, in January 2017, after waiting for a long time for a response from the Ministry of Transport of Viet Nam, the head of the Directorate for Roads finally contacted the team: "Compared with other companies, the accuracy of Tanaka Scale Works' weighing system is the best. Please complete all tests within three months." This was a request to accelerate the project. Wakabayashi recalls, "We had to bring all the parts used to the Viet Nam research institute to undergo testing to make sure that all standards were met.” To meet the demands of the examiners, Wakabayashi sometimes ran to an electronics store in Hanoi, bought a soldering iron, and assembled electronic circuits on the spot. When the parts finally passed all the tests in the spring of 2017, the members faced an accuracy test twice on the National Route 5 site. It was a very tense moment. They viewed a computer screen on the national route during the boiling hot summer. The final test… was passed! Tanaka Scale Works' high accuracy was clear to all stakeholders. 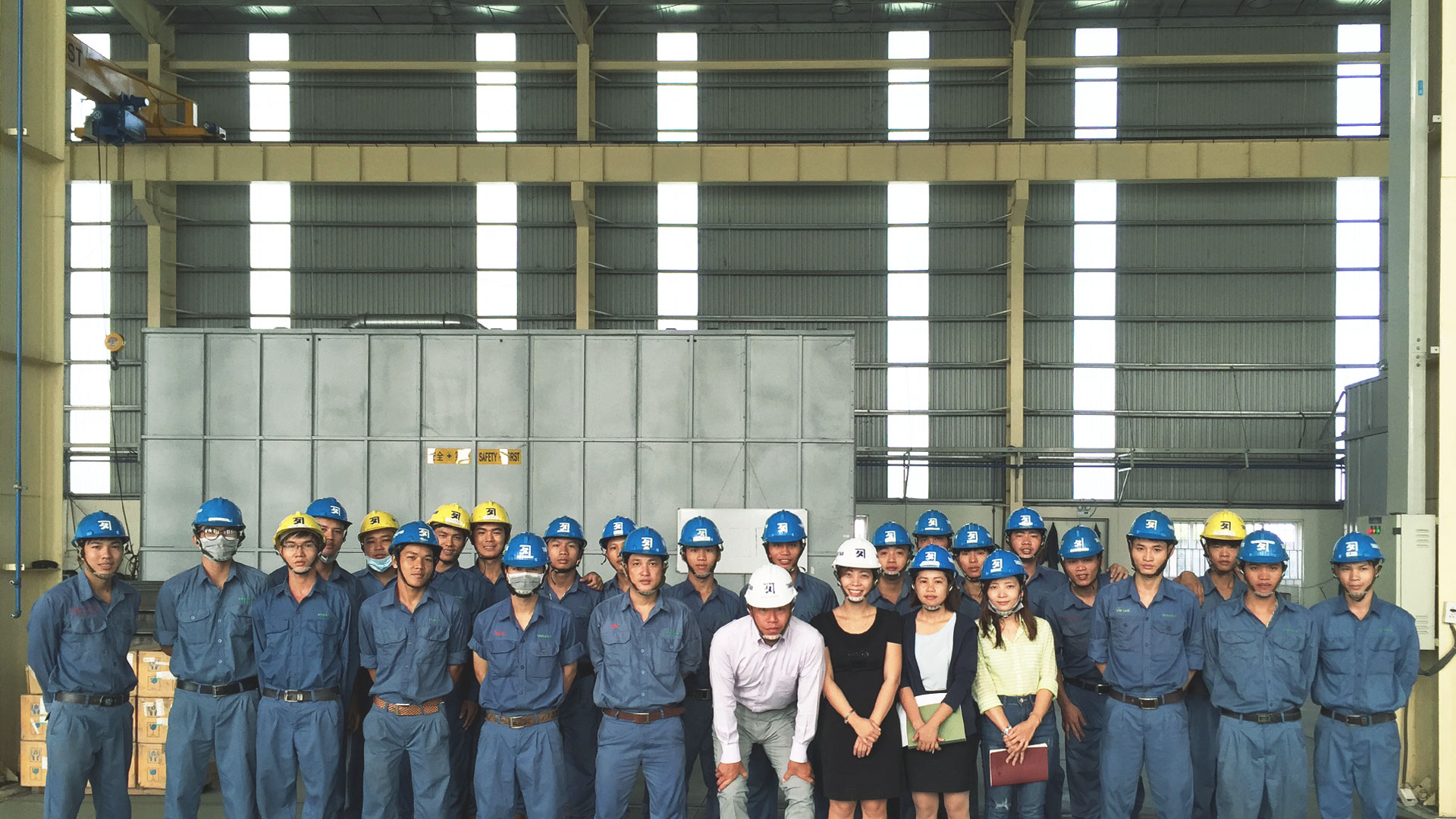 The united team made
for a smooth second phase
WIDTH: PX, HEIGHT: PX

The united team made
for a smooth second phase 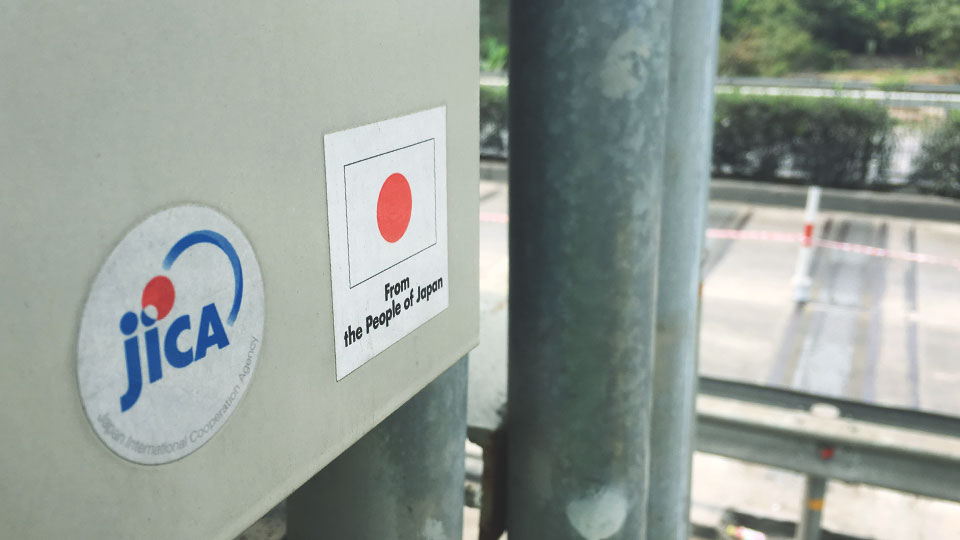 While gradually learning the Vietnamese language, the Tanaka Scale Works team members struggled to communicate with the Ministry of Transport and team members from Viet Nam. That is when a reliable friend appeared. This was XXX Quan, an employee of Tanaka Scale Vietnam. Quan initially accompanied the team as an interpreter, but as he gradually began to understand the meaning of the project, he started to negotiate with a sense of responsibility as a member of the Tanaka family. He said, "I could feel the strong desire of my Japanese counterparts to reduce accidents in Viet Nam. I wanted to match that desire." Vice President Nha, noted, "I always talked with Quan about the passion of our Japanese teammates. They were seriously thinking about Viet Nam, so we should match them in that passion." Finally, the project moved forward with all gears engaged. Communication with the Directorate for Roads became smoother and there was no delay in the negotiations. Companies in Viet Nam that deal with camera systems for capturing the license plate number of overloaded vehicles also participated in the team, and cooperation with those companies also went well. Tanaka Scale Works also planned a study group in Japan. Members of the Directorate for Roads were invited to Japan to exchange opinions with the road technology researchers of Japan's Ministry of Land, Infrastructure, Transport and Tourism and Nagaoka University of Technology, as well as with team members from Tanaka Scale Works' head office and factory in Sanjo. They were also shown the roads in Japan. A social gathering was held after the study session finished, and a good time was had by all. President Tanaka recalls, "I was delighted to see them learn about the century-plus history of Tanaka Scale Works, and I could really feel their trust in us." In September 2017, the second phase, which involved installing the system on the other side of National Route 5, proceeded very smoothly. This more than made up for the delays that occurred frequently in the first phase. Tanaka Scale Works' team members once again recognized the importance of building relationships of trust. 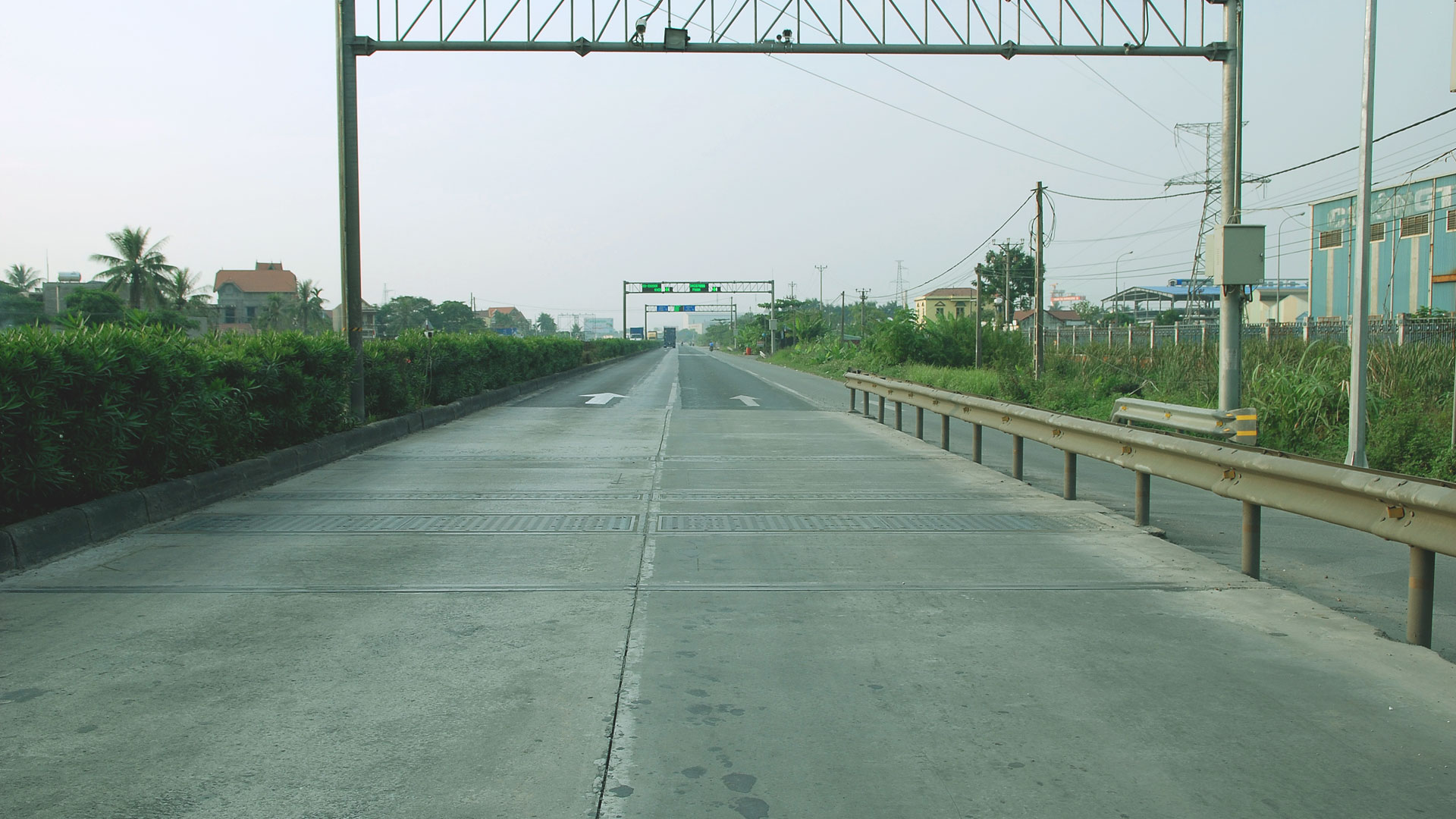 Delivery to the Ministry of Transport completed:
Onward to the rest of Viet Nam
WIDTH: PX, HEIGHT: PX

Delivery to the Ministry of Transport completed:
Onward to the rest of Viet Nam 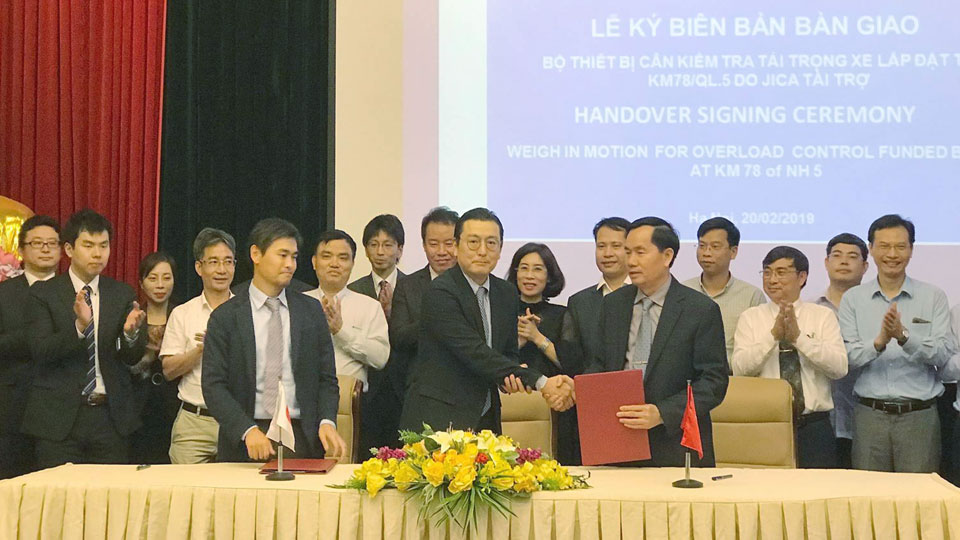 In October 2017, Tanaka Scale Works received approval from the Ministry of Transport of Viet Nam. In December, about 40 police officers in charge of the crack-down were trained for two days in how to use the weigh-in-motion system. In January 2018, a control demonstration was finally conducted. From midnight to morning, 11 vehicles were cited with violations, confirming the great effect of the new system. The system delivery ceremony to the Ministry of Transport in May 2018 attracted a lot of attention, with many media outlets including state-run television coming to broadcast it on TV. Chaki reminisces, "This was my initial goal—to successfully complete a project supported by JICA. When I returned to Japan and delivered a report to JICA along with President Tanaka, I felt a great sense of accomplishment." Wakabayashi said, "There were certainly challenges, but it was an interesting job. I was able to speak fairly well in Vietnamese by the latter half of the project, and I made friends among the construction staff. I gained a lot of valuable experience." The team members say today that they actually miss the days of wearing a helmet with other team members during the trial and error phase out on the boiling hot road in Viet Nam. President Tanaka has high hopes: "I think the best is yet to come. The goal is to put the system all over Viet Nam and actually reduce the number of overloaded vehicles. We have just now entered the first stage of mainstreaming our system." Tanaka’s hope is that measurement will save lives and contribute to a safer future for Viet Nam. Tanaka Scale Works will continue to take on challenges that transcend national borders.

You can request materials and request a quote from this form. If you have any questions, please feel free to contact us.